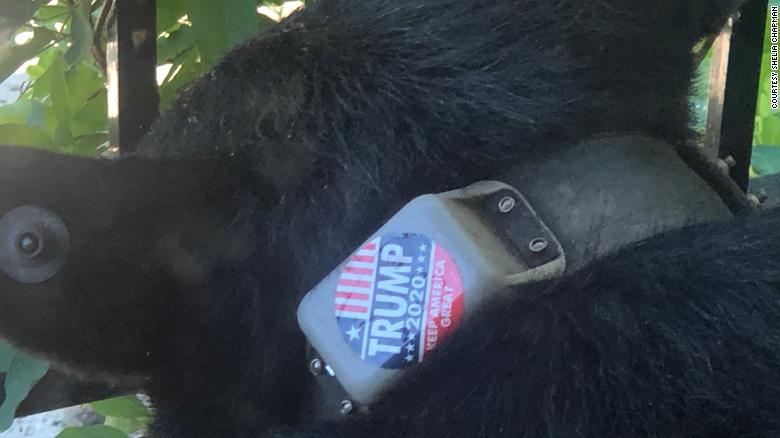 The Trump 2020 sticker was seen attached to the bear’s tracking collar, according to photographs obtained by CNN.

(CNN)Black bears will not be voting in the upcoming election, but that’s not stopping one bear from unknowingly showing a little support for the incumbent president.Help Asheville Bears (HAB), an organization in North Carolina, has put out a $5,000 reward to find the person or people responsible for putting a “Trump 2020″ sticker on the tracking tag of a black bear.”Whoever put these political stickers on these bears is cruel and heartless,” HAB wrote in a Facebook post. “HAB and our followers hope to stop and expose you. This is now the second bear this happened to, which can only mean either someone in the study is doing this or it is someone in the public. Either way, a full investigation needs to be done.”

“I believe this is an abhorrent practicum” Chapman told HAB. “These bears are already suffering enough with the heavy collars and metal ear mutilations. But to put a political sticker on the collar? No words can describe my anger and sadness.”

Serious and intellig…
She’s not only…
Another article said…
She’s not that…
dRats aren’t stupid,…
She has to reduce al…
make creamed corn ou…
The end game has to…
It’s an act. N…
Comey and Obozo shou…
Goldenfoxx, gay? Jee…
Shitty diapers and a…