Patriot Retort: Thanks to Lupus, I was resting on the couch when word came that AG Barr had Mueller’s long-awaited report and would be briefing Congress on its contents.

And over at MSNBC, it was the sob heard round the world. 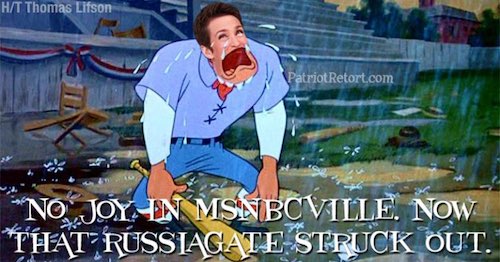 Not since the wee hours of November 9, 2016 has Rachel Maddow been so close to a complete psychological break.

This is your face on Trump Derangement Syndrome.

You know, someone better put Rachel Maddow on suicide watch. At the very least, keep her away from windows and sharp objects.

Now I figured 99.9% of the on-air “talent” at both MSNBC and CNN knew the Russian Collusion thing was a total fraud — chief among them John Brennan.

And maybe I’m correct about that.

But I’m beginning to suspect that Rachel Maddow is the 0.1% who actually, fervently believed.

All this time, I figured Maddow knew the garbage conspiracies she was peddling were nonsense.  I really believed that she was in on the con.

But the look of confusion on her face last night leads me to suspect that she genuinely bought into the lie.

She wasn’t a knowing peddler of lies after all, but a useful idiot.

I’m mean, just take a gander at the mystified look on her face.

The swamp wants us e…
I think it’s deflect…
And the state of Cal…
The next march on th…
Are they that stupid…
This sounds like.a r…
The American Media a…
This will backfire o…
Constitution?……
Subpoenas are for pr…
Is this a problem? 1
Harvey the pooca?