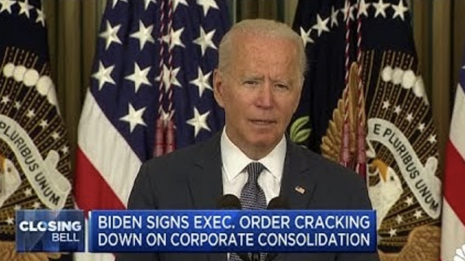 The sweeping executive order cracks down on Big Tech’s anti-competitive practices. The order includes 72 actions and recommendations aimed at promoting competition in the U.S. economy after the global pandemic.

“For decades, corporate consolidation has been accelerating,” a fact sheet released by the White House reads, stating that the order is “a whole-of-government effort to promote competition in the American economy.”

The order calls on the Federal Trade Commission to reestablish “net neutrality,” reversing a Trump decision that eliminated the laws.

The pay-off “r…
The filthy slobberin…
Tara Reade knows wha…
The dirty widely-kno…
Joe Biden the pedoph…
I should start some…
Allowing people to g…
lol, I made the post…
Just shut up for a m…
I’m guessing m…
Starving? Rob the da…
So… supermarke…
Odd. Last week, afte…
was that the Baltic…
“I am not the…
Wilfred The enduring…
Good grief peeps. I…