NB: As part of First Lady Melania Trump’s Be Best anti-bullying campaign, she invited Wilmington, Delaware 6th grader Joshua Trump to be one of the guests at Tuesday’s State of the Union. By now you probably figured out that while he shared no relation with the President, Joshua was bullied because they share the same last name. But that gesture rubbed CNN hosts Chris Cuomo and Don Lemon the wrong way during Monday’s Prime Time. 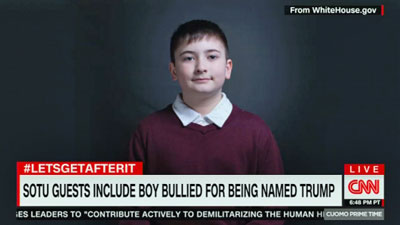 “I hate bullies, you hate bullies. You got to feel for this kid. My concern, though, about tomorrow night is that he’s going to be used as a political pawn,” Cuomo speculated. “That of all the different kinds of bullying that goes on, they’re highlighting somebody giving Trump a hard time.”

Despite claiming he thought it was a “good thing that she invited him”, Lemon also suggested Joshua was going to be used as a “political pawn”. “…You know, I don’t know. I hope that they’re not using it for political expediency,” he sighed.

Cuomo then seemed to take a shot at Joshua’s parents for allowing him to be a guest of the White House. more