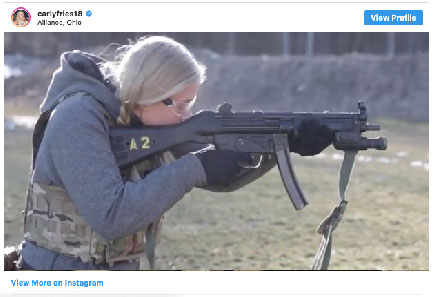 Carly Schroeder, once a regular on Disney’s “Lizzie McGuire” series, announced Wednesday that she is joining the Army.

The 28-year-old actress explained her decision in a lengthy Instagram post along with a photo of herself in tactical gear.

Schroeder began the caption with a nod to her first career in Hollywood. “For 22 years, I’ve played dress up for a living,” she said. “As an actress I’ve been kidnapped, gone blind, nearly eaten by lions and murdered on more than one occasion. I tormented Lizzie McGuire’s little brother on the Disney channel, was a dolphin trainer, the first female soccer player on an all-boys team and Harrison Ford once rescued me during an intense home invasion.”

“That’s exciting and all, but in January I decided to raise my right hand and swear into the United States Army,” she continued. MORE

Meanwhile, the saliv…
How friggin lame is…
The bigger problem i…
Worse: in the Garcet…
The mayor of Los Ang…
Two words: Teflon DE…
:, the cure is avail…
How many millions of…
Ditto Anonymous. Yes…
Say it, Dems…“…
:, If you’re t…
“at least if y…