Ghost emailed me and said, “I didn’t know you did the American Thinker graphic.”

I asked how he would know that. He said he stumbled on the archives of my articles that I’ve written over the years and Thomas Lifson put it in my byline. (*The image AT uses now is not the one I created. They used mine for a year during an anniversary year.)

I went over to look, but while there I reread one of my essays. It’s almost depressing to see where we are today after having written this a dozen years ago.

It was almost twenty years ago when my phone rang and fellow illustrator, Irony Curtain, was on the other end of the line asking incredulously, “did you just hear what I heard on the radio?”

I hadn’t, but the term “the radio” only meant one thing. AM Talk Radio. (I believe that when talk radio historians document the era, Irony Curtain will be identified as Listener Zero.) He said, “put it on and wait for the next news cycle.”

The on-air talent was more than likely a conservative, but the news segments, as they are today, had a pronounced slant towards the left.

It took about twenty minutes, but I finally heard it. This was during perestroika and the Ted Baxterish newscaster was talking about the latest reforms Gorbachev was implementing that were slowly freeing the Soviet Union from the cold grip of communism. Baxter quickly summarized one reform, then another, and then came the money shot…
“and with these reforms the once hardline Soviets are moving a little more to the left.”

I sat confused for a moment. I glanced at my outstretched hands questioning if I ever really knew my left from my right. I was about to doodle a crude diagram when the phone rang again.

“Do you believe what you just heard? I’ve been calling and complaining. You do the same!” Click.

It was amazingly easy to get right through to radio shows back in the day. The guy who answered the phone sounded like I had interrupted an epic bite of an egg salad sandwich. He listened to my rant: “The Soviet Union is communist. Communism is full blown socialism, which is the o’s and x’s of liberalism tried out on the playing field. Get it? If the communists retreat from their hardline stance they move (I looked at my hands) … right!  Not left!”

Egg salad said,  “Tin ya duff tall.” Which I deciphered as, “Didn’t you just call?” Then he hung up.

I was frustrated that the news could get such a simple thing so wrong, and that people like egg salad-boy were running the show.

But I could be heartened by the world political climate. America was winning the war of ideology with the Soviet Union, despite the best efforts of many of America’s own citizens… or so I thought.

The February 17th, 2009, episode of Jeopardy served up a heapin’ helpin’ dose of reality. I was working with my back to the television, half paying attention, when I heard Alex Trebek say, “bla bla Marxist stage bla blahh bla before communism bla bla control over the economy…. bla bla.”

Based on all the buzz words I reflexively shouted, “socialism!”

There was a slight pause, no one rang in, so I shouted the answer again.

The third time I yelled the answer I turned around to see if the cable went out. There, staring at me, like chronic mouth breathers, were three contestants who could probably run the category on Late Renaissance Flautists, their buzzer fingers pathetically poised in space, filled with ignorant inertia.

“Are you watching Jeopardy?”
“No, I’m eating egg salad.”

I called my mother in Florida because I remembered she got Jeopardy a half hour later than the New York broadcast. I wanted to confirm if I heard the question correctly.

As she held out the phone I heard Trebek say, “A Marxist stage before communism which is characterized by government control over the economy….  I thought it meant friendliness.”
I hadn’t heard that last part. They were teeing it up for the contestants. 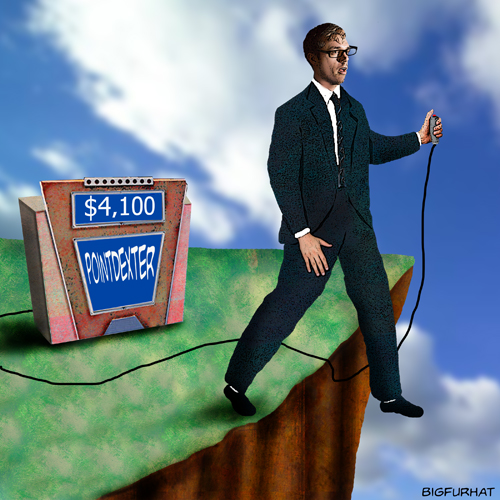 And no one even attempted to answer.

In the background I hear my mother mutter, “what is socialism?” (She struggles with “Are You Smarter than a Fifth Grader?”). Then Alex says, “Ooohhh, what is socialism? We were going for socialism. Pointdexter, you still have control of the board, pick a category.”
I hung up.

Bravo, liberals. Well played. The subtle disinformation that you’ve quickly inserted into newscasts, your control over classroom curricula, and your domination of the pop culture — all have been a master strokes. I can fully understand why these, otherwise brilliant, contestants stood motionless. The Jeopardy question threw them a curve ball. Had they not included the part that was supposed to make the question a slam dunk — “I thought it meant friendliness” — they probably would have rung in and replied, “What is Bushism?” Hell, it would be worth the shot that early in the game with nothing on the line. The staff writer had no idea his $200 question would have made a formidable Final Jeopardy puzzler.

The left have successfully branded the right as evil, corrupt, callous and self-serving and themselves as good, kind, caring, compassionate and fair. The dots are easily connected now. Sound reasoning tells us that if our evil enemies are moving away from their hardline ideology they must be moving left, towards goodness, just like the newscaster said twenty years ago.  My God, it’s simple logic, tainted by decades of subtle indoctrination. The über-smart contestants on Jeopardy are absolutely stumped by this throwaway question when they are told that they should be supplying a political term that is equated with communism, our ideological foe. “Are you sure it’s not Bushism?”

Yes. We are sure. The answer you are struggling to find is the same ideology currently being foisted upon us by the good, kind, caring, compassionate and fair Barack Obama. So it can’t be all that bad. I know it’s the ideology that is universally recognized as “Communism Lite.” Yes, I realize that I am teetering on hyperbole, and that nothing of the kind could ever happen here in the sophisticated, educated and level-headed U.S. of A., especially if it’s being ushered in by the “nice” party.