To Brendan Johnston, it was a simple choice. The 18-year-old senior wrestler from The Classical Academy in Colorado had never competed against a girl, and faced with the option to do so and potentially move one round closer to his goal of winning a state title, he instead decided to forfeit. 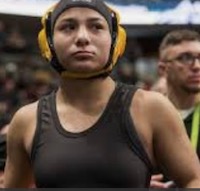 For one of the two would-be female opponents Johnston refused to face in the Colorado state wrestling championships last weekend, it was a frustrating outcome. She said she understood and respected his decision but questioned why any wrestler, of any gender, would decide to forfeit in the state tournament after making it so far. Johnston cited personal and religious beliefs for not wanting to wrestle a girl.

That should be the end of it. Right?

Why is there a controversy surrounding this? His body, his choice, no?

Imagine if you dare……
Do these jackboots m…
Resistance is futile…
Comply, comrades!
Just like in Lethal…
Bruteopia
Submit, bitches!
Turned over to the p…
I submit that a shot…
There’s no way the c…
Lockdown to Stomp do…
Brilled Black Butter
How long do you thin…
It is the propensity…
The ideal temperatur…
I remember when…
It may be a little d…