Stop the presses and mark your calendars, because this doesn’t happen too often. Justin Bieber—yes, that Justin Bieber—and Hailey (of the Baldwin family) are right. Not only are they right, but they’re right on a rather unexpected set of subjects: abstinence, faith, and marriage.

If you’re reeling right now, don’t worry, because you’re not alone. Looking to the Bieb for marriage advice might seem bizarre, backwards, misguided. It wasn’t that long ago that headlines around him were centered not around a quiet marital life but trashed hotel rooms, excess of the most vile sorts, and even nude photographs. What possibly could there be to learn from a child star turned pop icon, known as much for shenanigans as any actual talent? 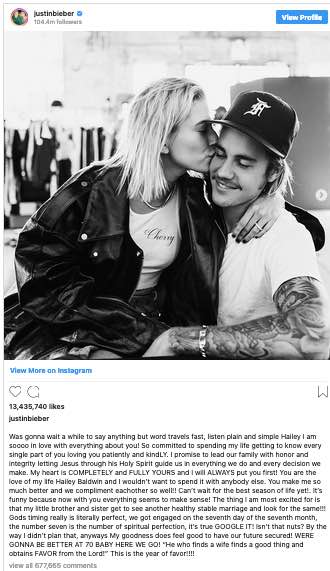 Justin Bieber is not yet 25, and his new bride Hailey is a mere 22. In a day and age when the average marriage age is the highest it’s ever been—29.5 years old for men and 27.4 years old for women, their decision to get hitched in their early 20s is countercultural. It’s also refreshing, and exactly what their fans and this generation need to see. A new long interview with both of them sheds a lot of light on their views on the past, their marriage, and their hopes for the future. more

I hope LaJoie wins s…
Anon^^^ Joe Walsh, o…
Hey Owning Nike shoe…
@judgeroybean July 5…
I would like see som…
This sick bastard is…
blm thugs would kill…
The shit of the GOPe…
An historical, world…
I wonder what it wou…
Black Muslims captur…
This is exactly what…