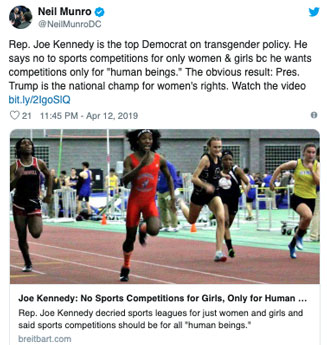 “It’s very frustrating and heartbreaking when us girls are at the start of the race and we already know that these athletes are going to come out and win no matter how hard you try,”

DC: A slew of liberal reports on the dispute over transgender athletes competing in women’s sports have one thing in common — they don’t include the voices of the female athletes they want to compete with.

Story after story celebrates the record-smashing successes of transgender athletes in a range of women’s sporting events, including wrestling, track and field and powerlifting. Sometimes the reports include criticism from parents or high-profile athletes who have weighed in on the dispute, but they don’t include anything from the female athletes these biological men are dominating, or even indicate the reporters have made an effort to talk to them.  more