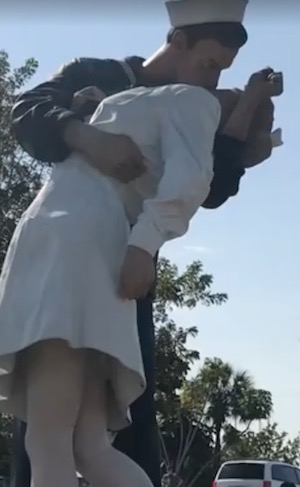 An iconic statue in downtown Sarasota sustained $1,000 in damage after “#MeToo” was spray painted on the statue just one day after the man portrayed in the statue died, according to Sarasota police.

The Unconditional Surrender statue depicts a famous photo of a spontaneous kiss in the streets of New York City between a U.S. sailor and a woman after the news of World War II coming to an end following Japan’s surrender on Aug. 14, 1945.

The woman depicted in the photo and statue, Greta Friedman, died in 2016. She was 92. Friedman reportedly told CBS News in 2012 she didn’t see Mendonsa approaching.

13 Comments on ‘#MeToo’ sprayed on Unconditional Surrender statue. Police are looking for vandal

was something on the…
Since nobody can def…
wray & his badge…
VERY likely!
No doubt Melania wil…
Anyone who shook han…
One more thing…
“because his t…
One final thought on…
Does she have to pay…
Since his lawyers we…
“something hap…
@mickey moussaoui Au…
Bills being passed,…
Search warrant, jeez…
Bwah, sniffel, sniff…
So creepy, people ar…