Geller Report: Is Facebook going to flag the Wall Street Journal and all the other fake news outlets who reported this fictional anti-Trump story? 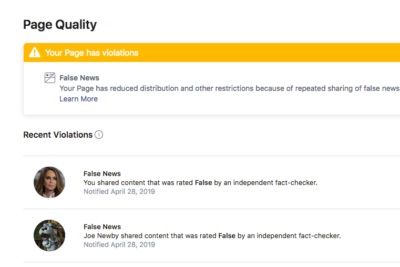 Ah, it never ends does it?

So basically The Wall Street Journal has been banging on about some claim from somewhere that the White House per President Trump’s request wanted the USS John McCain “out of sight” for when the President made his visit.

The WSJ also reported Wednesday that a tarp was put in place to cover the ship’s name.

Then a few media outlets, “journalists” and your all round anti-Trumper circulated the image of the USS John McCain with a tarp covering the name of the ship.

Is the claim true?

Of course not, this is the mainstream media we are talking about.

The picture was from Friday.

A spokesperson for the Pacific Fleet even confirmed the image is from Friday and the tarp was taken down on Saturday.

“We didn’t do anything to obstruct the name of the ship. The Wall Street Journal piece refers to a photo of a tarp covering the ship, that photo was taken Friday, May 24, the tarp was removed the following day,” another US Navy official said.

Another claim is that the White House Military Office emailed lower-level US Navy officials about keeping the ship out of view. A claim reported by CNN of course.  more

Historically, Italia…
Putin has an itchy n…
The child-traffickin…
Hey Wart Hog Cheney:…
“Ursula”…
The tell-all is the…
Biden has a long car…
Just say no to Satan…
Now is the time to c…
“oh, what a ta…
My company is all to…
Joe Biden and crime…
Part of it is brain…
“It Takes a Lo…
She was/is an inspir…
Seems gay cannibal s…
I have zero trust in…