DC: Former Democratic Texas Rep. Beto O’Rourke has had his first brush with the law on the 2020 campaign trail, according to reports. 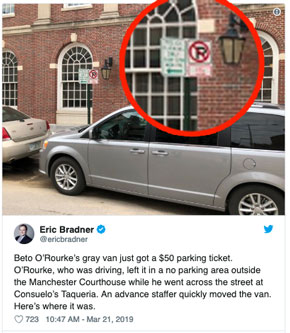 CNN’s Eric Bradner shared a photo of a gray van, which he said was parked illegally by the candidate himself and was then moved by a staffer.

“Beto O’Rourke’s gray van just got a $50 parking ticket,” Bradner tweeted. “O’Rourke, who was driving, left it in a no parking area outside the Manchester Courthouse while he went across the street at Consuelo’s Taqueria. An advance staffer quickly moved the van.”