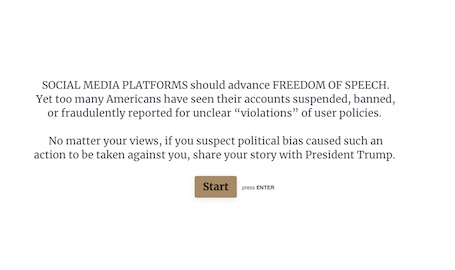 Breitbart: The White House is asking Americans to share their personal stories of censorship and bias on social media. Predictably, liberals don’t seem interested in believing these victims.

The appeal was announced on Wednesday and includes a tool to monitor Big Tech censorship. This is welcome news for conservatives and anyone concerned about the trend of censorship by the giant social media and search engine companies. It’s proof positive that Donald Trump is very serious about stopping the suppression of conservative speech on social media, as he alluded to in a recent tweet, when he said, “Social Media & Fake News Media, together with their partner, the Democrat Party, have no idea the problems they are causing for themselves. VERY UNFAIR!”

The mainstream media response to the new White House initiative, however, expressed precious little concern over the notion that the tech oligopoly is abusing its power over ordinary Americans, instead trying to gaslight us by implying that social media censorship is all in our heads.

I wasn’t surprised. That’s been the fake news’s consistent stance throughout Big Tech’s campaign to banish voices on the right from the modern public square and shift the terms of the debate in favor of their Democratic allies.  more here

Do these jackboots m…
Resistance is futile…
Comply, comrades!
Just like in Lethal…
Bruteopia
Submit, bitches!
Turned over to the p…
I submit that a shot…
There’s no way the c…
Lockdown to Stomp do…
Brilled Black Butter
How long do you thin…
It is the propensity…
The ideal temperatur…
I remember when…
It may be a little d…
“The People Wh…