A week after saying any Democrat who made the 2020 presidential race about “Trump’s personality” will beat him, Fox News owner Rupert Murdoch hires Paul Ryan to serve as a board member for the news organization.  This announcement follows on the heels of Fox News hiring the former head of the DNC, Donna “Debate-Gate” Brazile, as a contributor.

Yes, it is clear to see the direction and intent of Rupert and Lachlan Murdoch.
. 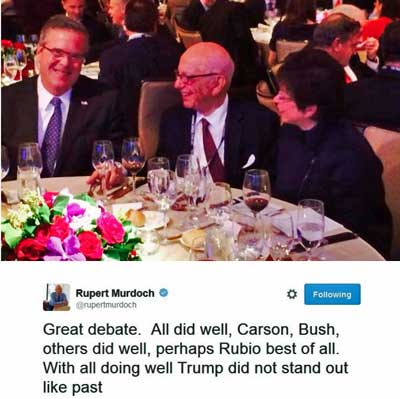 It must also be remembered that in 2013 Fox News worked behind the scenes to facilitate the Senate’s comprehensive immigration reform platform.  Additionally, a year later, Murdoch himself advocated for Jeb Bush and Marco Rubio as the preferred candidates in 2016, using Megyn Kelly to achieve their objective.  Yes, it is all one unfortunate, political and ideological continuum.  more here

14 Comments on Paul Ryan Joins Fox News Board of Directors

The real goal here i…
Yeah – “…
How can you have dea…
From what I’ve…
Nope. Hannity was in…
How did he get here,…
No, say it isn…
As I recall the Fren…
I’m still thin…
I got the Bernie tex…
@Different Tim That…
Vindman is a politic…