The Blaze: A man took to the microphone for the public comment period at last week’s Seattle City Council meeting, looked at the members seated high in their chairs in front of him, and hit the elected officials with an observation that should’ve roused them to attention.

“It’s real discouraging to come up here and see all the heads down, it’s like,” he said before presiding Councilmember Debora Juarez interrupted him, KTTH-AM reported. 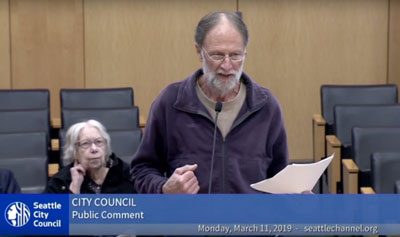 The man stared in silence for a few moments, apparently not quite sure if he heard correctly. But he did.

Councilmember Mike O’Brien looked up from his phone, the station said, noting that councilmembers Kshama Sawant and Lorena Gonzalez swiped and typed on theirs.

The man asked Juarez if his time could be restarted; she said no.

“So it was unreasonable for me to ask that people look up and give me their attention?” he asked, after which Juarez informed him he only had a minute and 30 seconds left.

The man folded his prepared statement, noting he had planned on discussing the “state of our democracy” — and a loud sigh was heard. It isn’t clear who was losing patience. Watch

Happy Birthday to th…
“The Discarded…
I have a “Joke…
I introduced Carl Be…
hahaha! wot a fuggin…
He scored a zero and…
The Smegmas.
Wot? cam I has some…
Anyone else here dan…
My prince, my 13 yea…
The Left will surely…
“Why do republ…