A UC Riverside student who stole a peer’s Make America Great Again hat off his head and refused to give it back now faces steep legal consequences.

A criminal complaint provided to The College Fix by the Riverside County District Attorney’s Office states that Edith Macias has been charged with one misdemeanor count of grand theft for the September 27 incident.

The next court date on the matter is slated for March, and the maximum penalty Macias faces if convicted as currently charged is one year in county jail, a spokesman for the DA’s office told The Fix. 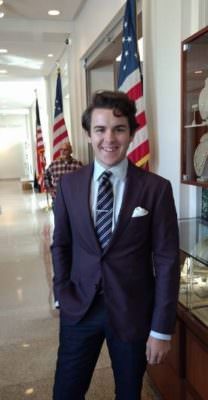 The charge was filed after UC Riverside student Matthew Vitale, the student who had his Make America Great Again hat stolen from off his head, decided to press criminal theft charges against Macias.

According to the declaration in support of an arrest warrant, Macias told the officer who responded to the incident that the reason she swiped the hat was because it represented “genocide of a bunch of people.”

“She stated she wanted to burn the hat because of what it represented,” it states.

In a now-viral video of the incident, Macias stormed into a student services office with the hat and declared: “UCR is letting people wear this shit on campus? Make American Great Again, really? There were lynchings and genocide and mass deportations. … I fucking hate this country. … And I am not leaving. … We need to get rid of all ya’ll.”

30 Comments on Remember The Idiot College Student Who Swiped a MAGA Hat Off a Trump Supporter?

I should start some…
Allowing people to g…
lol, I made the post…
Just shut up for a m…
I’m guessing m…
Starving? Rob the da…
So… supermarke…
Odd. Last week, afte…
was that the Baltic…
“I am not the…
Wilfred The enduring…
Good grief peeps. I…
I remember Chieffill…
Here it is, almost 2…
ecp for the win!!! E…
Brad, I’m not…
Here you go Loco, I…