A South Carolina man who pleaded guilty to trying to join ISIS has been sentenced to 20 years in prison.

A federal judge on Monday, June 10, sentenced 20-year-old Zakaryia Abdin to 20 years behind bars for attempting to fight for the ISIS. 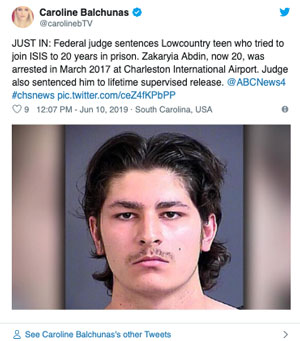 His sentence comes after he pleaded guilty in August 2018 to attempting to provide material support to a terrorist organization, following his arrest in March 2017.

When Abdin was just 18, he began to facilitate connections with members of the terrorist organization over social media in an attempt to join ISIS, reported CBS Austin.

Biden must be a Wayf…
“…raisin…
I give his arrest a…
@Steve – IT IS…
WOW!!!!!! That…
What a good time to…
I have seen comments…
KEVIN speaks a truth…
Molon, for another p…
Orange Radio Man! 1
shitweasle Weaver wa…
We are being gaslit…