About ten years after producing Band of Brothers for HBO, Tom Hanks produced the mini-series The Pacific.

And though it didn’t get as much attention as Band of Brothers, The Pacific is definitely worth watching. In fact, if you can find it to rent (or just buy it!), The Pacific might be a good mini-series to watch this Memorial Day weekend.

I don’t know about you, but every Memorial Day, I take the time to watch something that features our brave soldiers.  This weekend, I’m renting They Shall Not Grow Old – Peter Jackson’s documentary film about World War One. 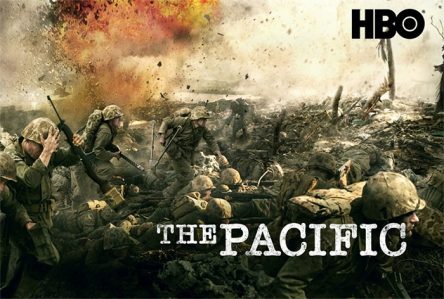 And, if it weren’t for the fact that I just watched The Pacific for the third time last weekend, I’d definitely watch that too. Heck, maybe I’ll watch it anyway. Why not? In fact, if I time it right, I could do a marathon and watch both Band of Brothers and The Pacific.

Band of Brothers follows the 101st Airborne’s Easy Company from their drop into Normandy the night before D-Day to their arrival in liberated Austria after Germany surrendered.

The Pacific follows the US Marines who fought the battles against Japan in, well, the Pacific theater — Guadalcanal, the Solomon Islands, Iwo Jima, Okinawa.

And, like Band of Brothers, The Pacific is based on the real lives of men who served.  keep reading

18 Comments on The Pacific: A great mini-series to watch this Memorial Day

looks up from racing…
Da Dem Dees doo dah…
I don’t think I wann…
Dee Monument of Da D…
Does Obama get honor…
We’re going to…
So did the looters t…
Speaking of soft-dri…
News Flash Mayor idi…
Epstein did not scul…
Needs Bill Clinton!…
Unless it is a small…