Patriot Retort: In my post Better Put Rachel Maddow on Suicide Watch, I said that Rachel went through three of the five stages of grief on her show last night – Denial, Anger and Bargaining.

Well, it looks as if by morning, poor Rachel went right back to Denial.

Ah, yes. It was the Russians who are spreading this!!!!

Now, I know of nobody who said Rachel was crying through the show – only that she looked on the verge of tears. 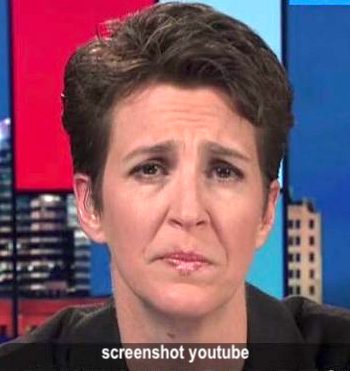 And, come on!  She did look on the verge of tears.

But you can judge for yourself. Does she not sound like she can barely keep her composure?

Of course the Twitter user who filmed it at extreme close-up so you could see Rachel’s eyes welling up got suspended by Twitter for posting the clip.  MORE

happy b’day ec…
c.nash very nice com…
large gatherings rep…
see? I always forget…
“I can’t wait…
Ok, but with a few c…
The only nit I have…
I miss the days befo…
Hands up, don’t shoo…
Where’s the co…
The shaking you see…
Dad took the trainin…