During his 36 years in the Senate, Joe Biden helped craft some of the strictest anti-drug laws of the 1980s and 1990s. But drug reform advocates say his own children were able to avoid the brunt of these laws because they were white and wealthy. 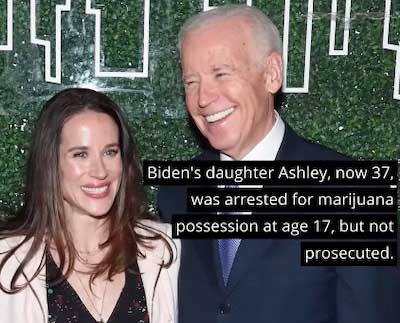 The 76-year-old former vice president’s daughter Ashley, now 37, was arrested for marijuana possession at age 17. Records show the prosecutor declined to pursue the charges. A decade later, a “friend” of Ashley Biden attempted to sell the New York Post a 43-minute hidden-camera video purportedly showing Ashley snorting cocaine. The police did not get involved. 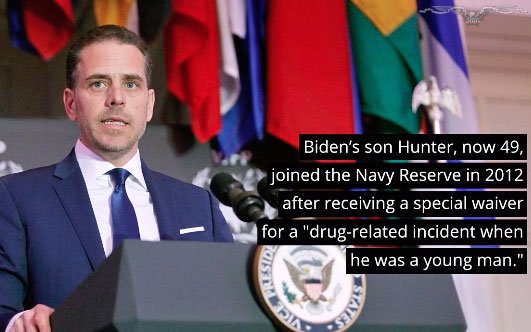 Biden’s son Hunter, now 49, joined the Navy Reserves in 2012 after receiving two special waivers, one because he was three years over the age limit of 40 and another for a “drug-related incident when he was a young man.” A month into his service, he tested positive for cocaine during a random drug test and was discharged.   MORE HERE

Why wouldn’t t…
Co-dooky theater!
Better get my old-ma…
Mickey Mauci snake o…
Wow. You could see t…
Yep, remember when T…
Says the party of th…
Foul, too. 2
The View hags…
Welcome to OnStop, h…
I AM OLD Most, not U…
What a bunch of fowl…
They’re mistak…
Do they really belie…
She was trying to cl…
They’re anythi…
Project and transfer…