Since they were unable to hang their tinfoil hats on “collusion,” the conspiracy theorists masquerading as “journalists” have now shifted gears to “obstruction.”

They just won’t let this go.

Of course the greatest irony is Rachel Maddow – the Commander-in-Chief of the Tinfoil Hat Brigade – inviting on disgraced former FBI Deputy Director Andrew McCabe.  The two consoled each other by pretending that Mueller’s report made the case that President Trump is guilty of obstruction of justice.

The general feeling among our media betters is that Trump must be guilty of obstruction because he was so furious over this witch hunt.

Chief among the talking points: An innocent man wouldn’t get so mad.

Do these morons really think that a man wrongfully accused wouldn’t fight back against the accusations? 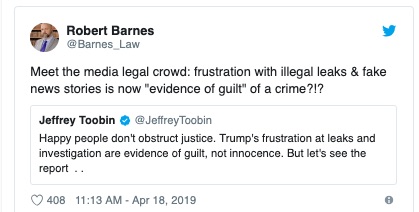 Ask yourself how you would react if your entire life and the lives of those around you were turned upside down over charges you know are false.  If you were the subject of a two-year “investigation” into something that you know you’re innocent of, would you stand silently by?

It’s like seei…
I think this is an i…
China wants what Naz…
“Say it ain…
Get real. You can…
Send her back to Som…
Bleeding heart, libe…
Outhouses are worse,…
BS If Trump set out…
The Washington money…
My brain has enough…
I don’t recomm…