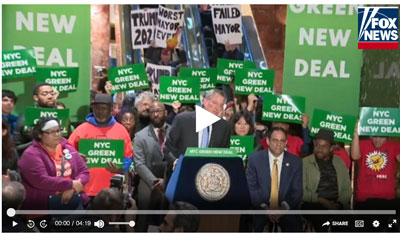 Mayor de Blasio held a rally in the lobby of Trump Tower yesterday to promote his “Green New Deal” initiative and threatened the president and his family with millions of dollars of fines. The mayor’s publicity stunt was marred, however, by protestors riding the escalator in the background holding signs in support of the president and declaring de Blasio “Worst Mayor Ever.”  More