A grandad has been given something he remembers from when he was a young boy. Harry Littlewood, 68, has been reunited with something that was uncovered by workers at the Redrock development in the centre of Stockport, Greater Manchester. He grew up in the area, which had rows of cottages built in Victorian times, and made a nostalgic visit to the site when building began last year.

Contractors had uncovered the remains dating back to this era and Harry recognized XXXXXXXXXXXX. Harry asked if he could have it and when Stockport Council agreed he was presented with it. Harry said: “It was the one I used when I was a nipper 60-odd years ago, I never thought I’d see it again. 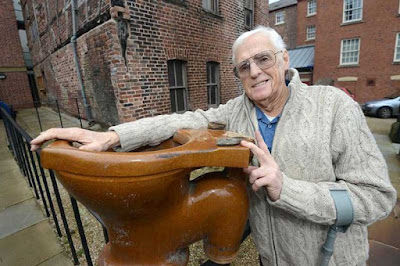 “I can’t really use it as a fruit bowl so I’ll probably give it pride of place in the garden and use it as a planter.”

Why does he have his thumb up under the rim?

What is wrong with some people?

19 Comments on His Old Friend