So much can be said through humor — – IOTW Report 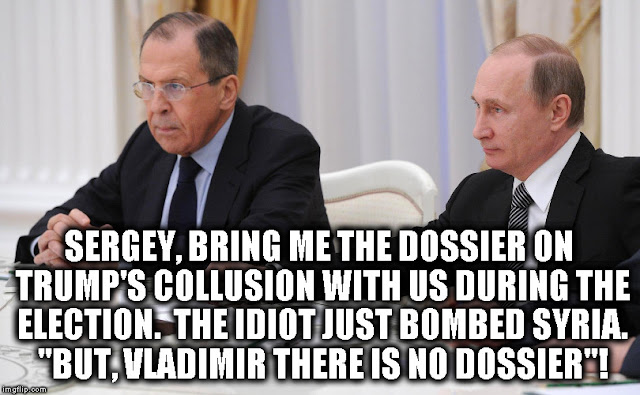 Following President Trump’s recent attack on Russia’s primary ally in the Middle East, Syria.  Vladimir Putin is said to be outraged and has ordered Sergey Lavrov, the Russian foreign minister to turn over the dossier on Trump’s collusion with KGB agents during the last U.S. election so they could be forwarded to the DNC (Democratic National Committee).  However, after an extensive search of the Kremlin archives no such document was found.  On a related note, Foreign Minister Lavrov was found dead at his Moscow estate earlier today.
more
This is extremely pithy.
Wouldn’t Putin expose Trump/Russian collusion as a consequence of Trump’s outrageous bombing of the Russian ally Syria?

8 Comments on So much can be said through humor —

Not sure how excited…
Minesotans ruined ev…
The slopes are up to…
The Chinese are just…
Minnesota is The Nor…
Vicious Sid YAWN Bee…
I understand they re…
If they’re all…
Speaking of state fl…
Why not just fly the…
I remember when Minn…
Maybe Ilhan Omar can…
China owns the presi…
That flag should be…
Their balloon. Whoop…
Well at least we pop…
The new design will…

iOTWreport.com ©2023 ----- iOTWreport is not responsible for the content of comments. All opinions in comments are solely the commenter's.