Once again #MuellerReport edited messages to make them appear more damaging,
full transcript of this phone call reveals Dowd’s message was pretty typical for a lawyer and he clearly states he’s not interested in any confidential info.
What else did they manipulate 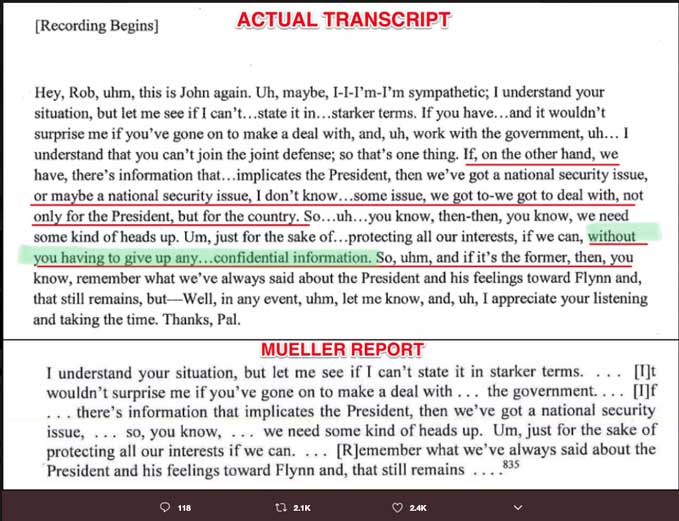 Should be noted this is now the second manipulative edit by Mueller’s team. Rtskhiladze lawyer demanded a retraction of the inaccurate portrayal of their client and noted the special counsel had all of the interactions but didn’t disclose them. http://www.documentcloud.org/documents/5977239-Modified-ASB-Letter-to-WPB-Re-Mueller-Report-

Among other evidence, the judge ordered the government to file on the public docket “the transcript of the voicemail recording” from President Trump’s attorney John Dowd to Michael Flynn.  The transcript of that voicemail recording was cited in the Mueller report as evidence that team Trump was trying to obstruct justice by shaping witness testimony.

Notice how Mueller leaves out (via edits) the context of the call, and the important qualifier: “without you having to give up any confidential information.”   Clearly Dowd does not want to interfere in Flynn’s cooperation with the special counsel, which is opposite to the twisted claim presented by Weissmann and Mueller’s report.  Keep Reading

Don’t forget s…
It’s not just EV’s t…
Hey Sport, how many…
Thanks, but we alrea…
Mumbling, Moisturizi…
“This should n…
The very second ant…
They are real in the…
Kali Refugee in Texa…
Lost our rural fire…
There’s a mous…
youthenizing is the…
Absolutely & I h…
Anymouse The scaled…
Leaving work soon so…
What will be done? A…
brown eyed girl…

Visit Our Friends At the Dixon Gallery