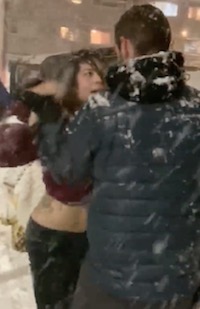 A woman was arrested in Seattle on Sunday night after video caught her driving into a group of people having a snowball fight, according to police.

That video, which has been viewed more than half a million times on Facebook, shows a small blue Jeep whipping around in a snowy intersection and then driving off the road and toward a group of people.

“Oh my god,” bystanders can be heard saying in the video, as those in the vehicle’s path scatter.

“This Seattle woman just attempted vehicular manslaughter against me, my brother, and my friends!!” Wieser wrote. “We were having a snowball fight and a snowball hit her blue Jeep, and THIS is how she responded!”

Police performed a field sobriety test on the woman and discovered she was under the influence of marijuana, KIRO reports.

17 Comments on She brought a Jeep to a snowball fight